Discover the Advantage of QPS Stability 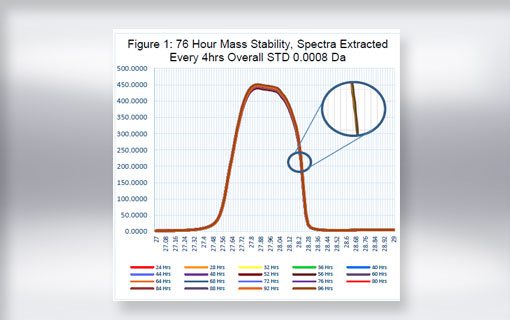 Mass stability is probably the most noted performance factor for quadrupole power supplies. Typical specifications for mass drift are 0.1 Da over 48 hours. In order to demonstrate exceptional mass stability performance, we used a QPS operating at 2.9MHz to drive a 19mm Tri-filter QMF configured as part of a MAX instrument having a mass range of 1 to 50 Daltons.

Data was collected continuously over a 76 hour period. Figure 1 is an overlay of 19 scans from the data set taken at the end of every four hours. The peak position movement is measured to be just 0.0008 Daltons, which means that it is essentially unmoved over the entire 76 hour operating period. 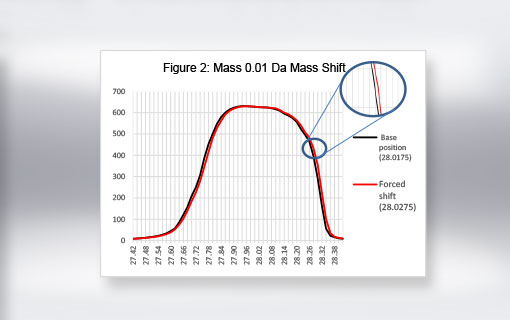 Peak Position Does Not Change Over 76 Hours

In order to determine the limits to which mass drift can be detected visually, we used the programmable mass position command in Extrel’s “Merlin” software application to shift the peak position until the change was detectable. Figure 2 shows a peak that was moved just 0.01 Da using the Merlin Automation Data System.

Visually, the mass drift is still barely perceptible and is in fact a factor of x10, better than most commercial specifications. Looking more closely at the exploded portions of the plot, which show the peak edge at approximately half the maximum height, it can be seen that the previous data from the 76 hours of continuous scanning fits well within the forced shift. The mass drift of the QPS is visually undetectable. 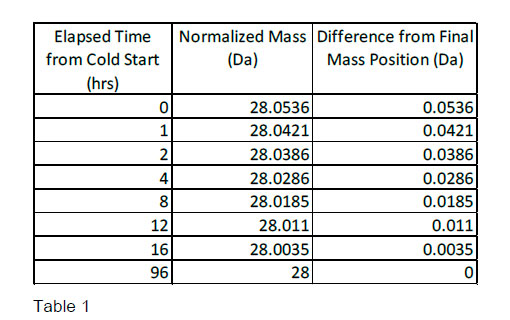 All quadrupole power supplies take some time to stabilize, often referred to as a “warm-up”. The time to warm up from a cold start is a key performance factor, and is another good indicator of quality power supply design.

The initial start-up mass position was less than 0.06 Da from the mass position 4 days later, demonstrating the exceptional mass stability, once again. 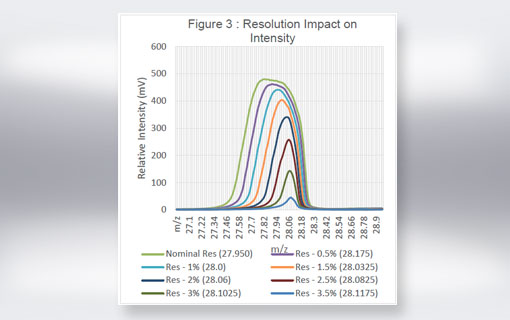 Another key performance factor is the resolution stability. This is important as it affects the repeatability of the ion intensity measurement at any nominally the same set of experimental conditions. In order to demonstrate the impact of resolution stability, Figure 3 shows a series of peaks where the programmable resolution command in Merlin was used to transition a peak from low resolution to high resolution. 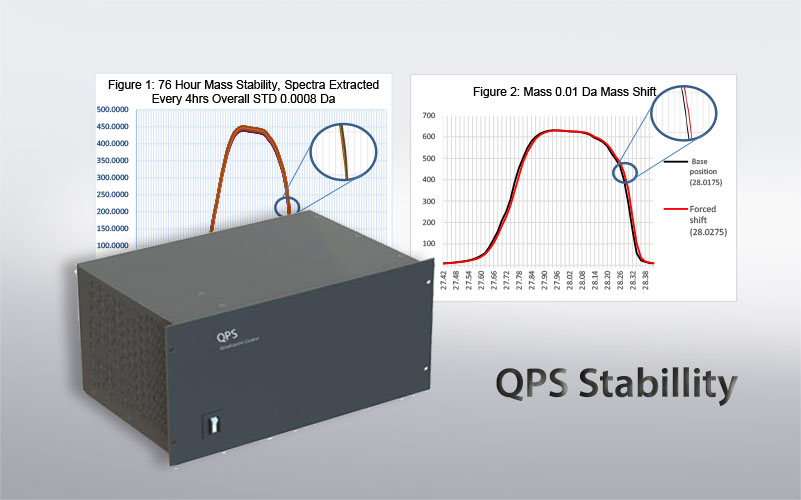 REQUEST A QUOTATION OR FURTHER INFORMATION